The architecture and psychology major shares her vision for a New York City landmark as a finalist in the Reimagining Brooklyn Bridge Competition.

Architecture and psychology major Shannon Hui ’22 refused to wait until she joined a firm to introduce innovative architectural ideas to the world. In fact, Hui and her team (Yujin H. Kim ’19CC and Kwans Kim from NYU’s Class of 2024) are finalists in the young adult category of the Reimagining Brooklyn Bridge Competition, presented by the Van Alen Institute, which challenged people to rethink the bridge’s walkway.

“I think that there has been an urgent drive to reimagine how people can interact with one another and relate to the public realm during and post-COVID, in addition to its intersections with racial and queer justice,” said Hui.

The call to update the bridge came as the first wave of the COVID-19 pandemic upended New York City, adding a new element to consider: how to social distance on the bridge’s overcrowded walkway. The public was invited to vote on entries through July 30, and winners will be announced on August 3, via a press release.

Tapping into three guiding principles — preservation, diversity, and future progress for change — Hui’s team designed their Do Look Down installation to feature a glass walkway above the bridge’s girders, with an LED projection system for the adjacent bridge spaces to display art that honors the city’s cultures, histories, identities, and more. In this “5 Questions With …” interview, Hui shares how the pandemic played a role in her design choices, what she’s most looking forward to this fall, and how Barnard faculty gave her the tools needed to think of new uses for a 137-year-old structure.

Watch a video below of Hui, a Young Adult Finalist, as she introduces her team’s project:

How did you prepare for this competition and how did the pandemic inform your approach?

Our team decided to put something together on a whim after seeing a social media ad for the competition. Despite having very different academic interests — Yujin is studying for his Ph.D. in math, while Kwans will be a first-year [undergraduate] and has a passion for the performing arts — it worked because we could each approach the problem with our own respective agendas, as we have all used the bridge in our own ways.

I think that there has been an urgent drive to reimagine how people can interact with one another and relate to the public realm during and post-COVID, in addition to its intersections with racial and queer justice. This health crisis has violently amplified the systemic inequities that are built into New York’s existing urban infrastructure, and for designers and planners to continue to operate within a vacuum is a position of immense privilege. More than anything, this competition became an opportunity for us to not necessarily provide all the answers to what a “better” Brooklyn Bridge represents, but start conversations about meaningful public spaces where people can feel seen and heard — not just in an idealized future, but now.

What did you learn from Barnard and faculty that helped you with this project?

In developing our proposal, our first and foremost inspirations were the local stakeholders we had the opportunity to engage with and receive feedback from. Throughout this process, we worked closely with representatives of the Van Alen Institute, New York City Council, and other civic institutions who were instrumental to the formation of our final designs.

I was also fortunate to do an internship at a lighting design firm in Hong Kong this summer, supported by the Beyond Barnard internship program. This provided me with both a technical and a theoretical foundation to think about not only how the bridge looks during the day, but also how intentional lighting design can completely transform the experience of New York City’s public monuments and spaces at night.

What was most exciting — or terrifying — about reimagining one of the most iconic bridges in the world?

Apart from its mobility issues and opportunities to optimize the distribution of available space, I’m not sure anyone really asked to “change” the Brooklyn Bridge. It’s an icon of the City and was a technological feat of its time. When we first started brainstorming ideas for our proposal, we struggled to think of structural interventions that wouldn’t compete heavily with the existing bridge and be upsetting to New Yorkers. This led us to scrap all of our initial ideas and form the three following guiding principles:

As we developed our proposal further, we made sure that every detail stayed true to our original principles. So, I guess both the most exciting and terrifying part about participating in this competition was the Brooklyn Bridge itself.

Do you have a favorite bridge or building?

It’s hard for me to identify a singular favorite structure, but I always like to tell people about the High Line. I participated in a High Line Feminist Field Trip, hosted by the Athena Center for Leadership Studies during my first year, and loved learning about the nonprofit’s efforts to champion civic engagement, social justice, and urban gardening through education and programming. And needless to say, the public space is visually extraordinary.

At the same time, the High Line’s role in the dynamics of its surrounding neighborhoods offers a critical lens to the practice of public art and urban renewal, which drives me to be deliberate and sensitive when considering the communities that I hope to serve as a designer.

What are you most looking forward to this fall?

Seeing the ways by which Barnard will adapt their policy and curricula in response to ongoing dialogue surrounding public health, as well as the College’s own relationship with intersectional, racial advocacy within the institution and beyond. I believe that our community is most powerful because of its willingness to engage with, respond to, and grow from difficult conversations. 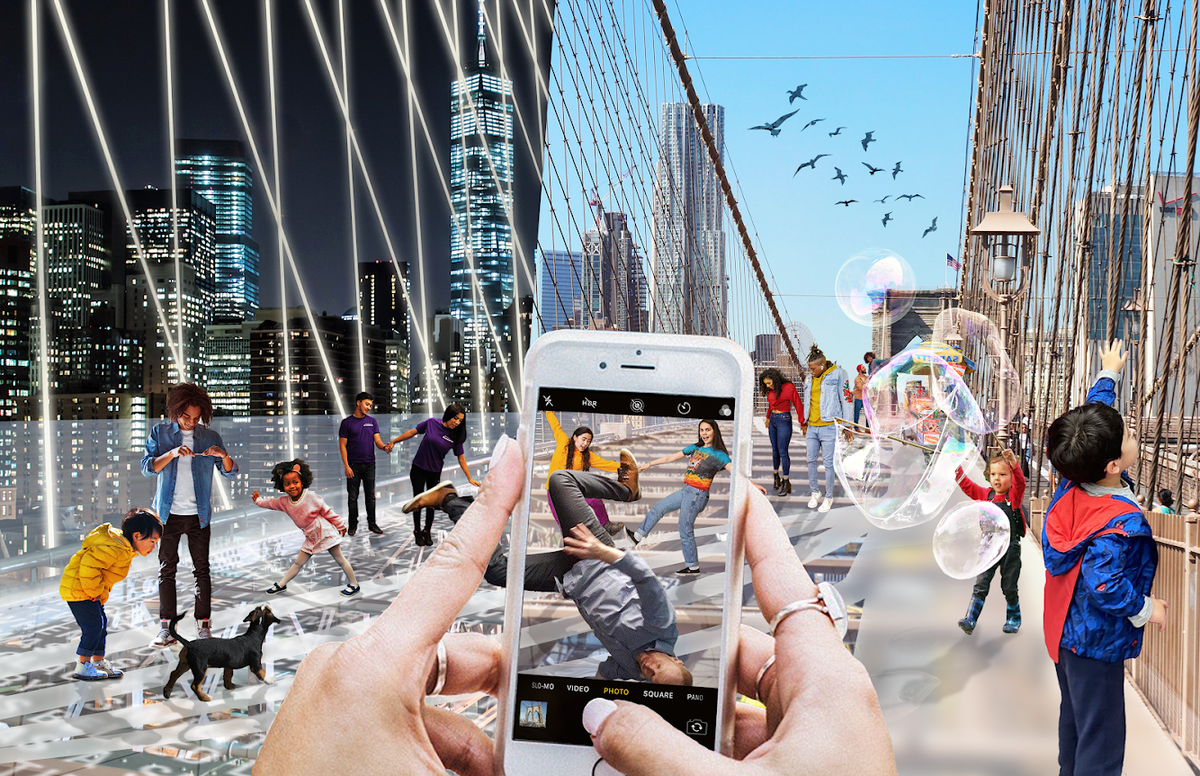 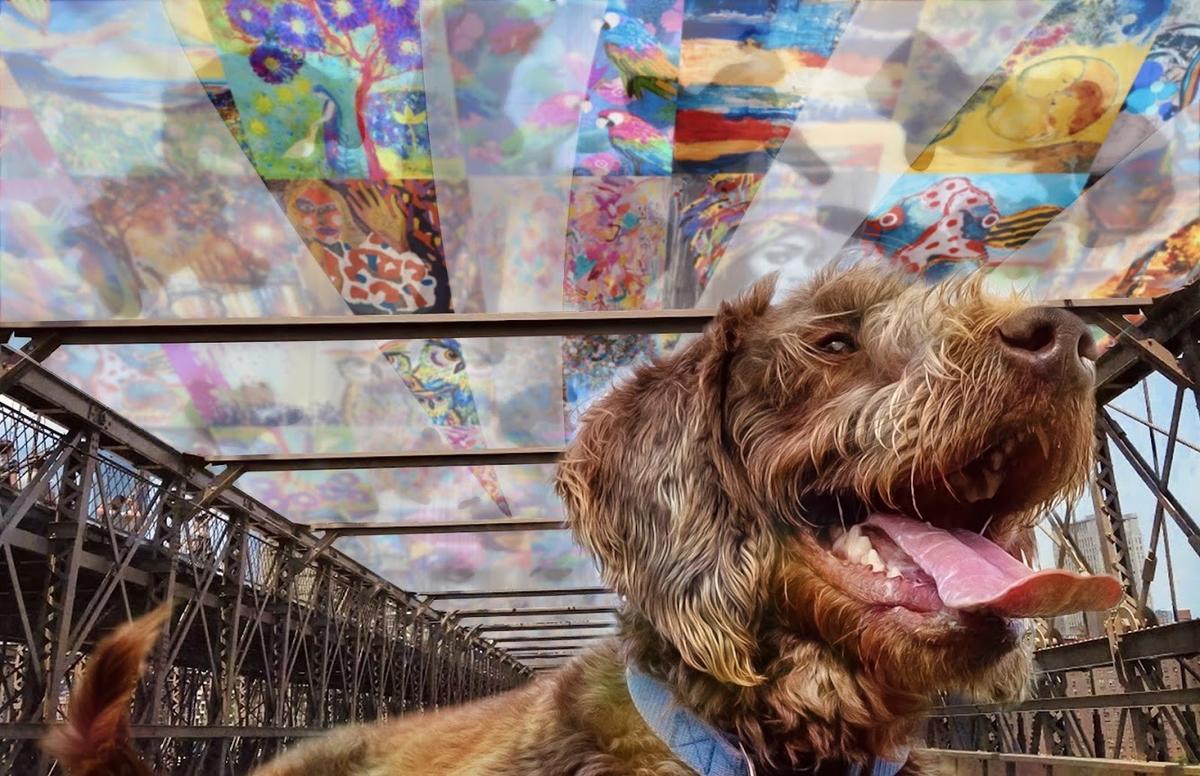 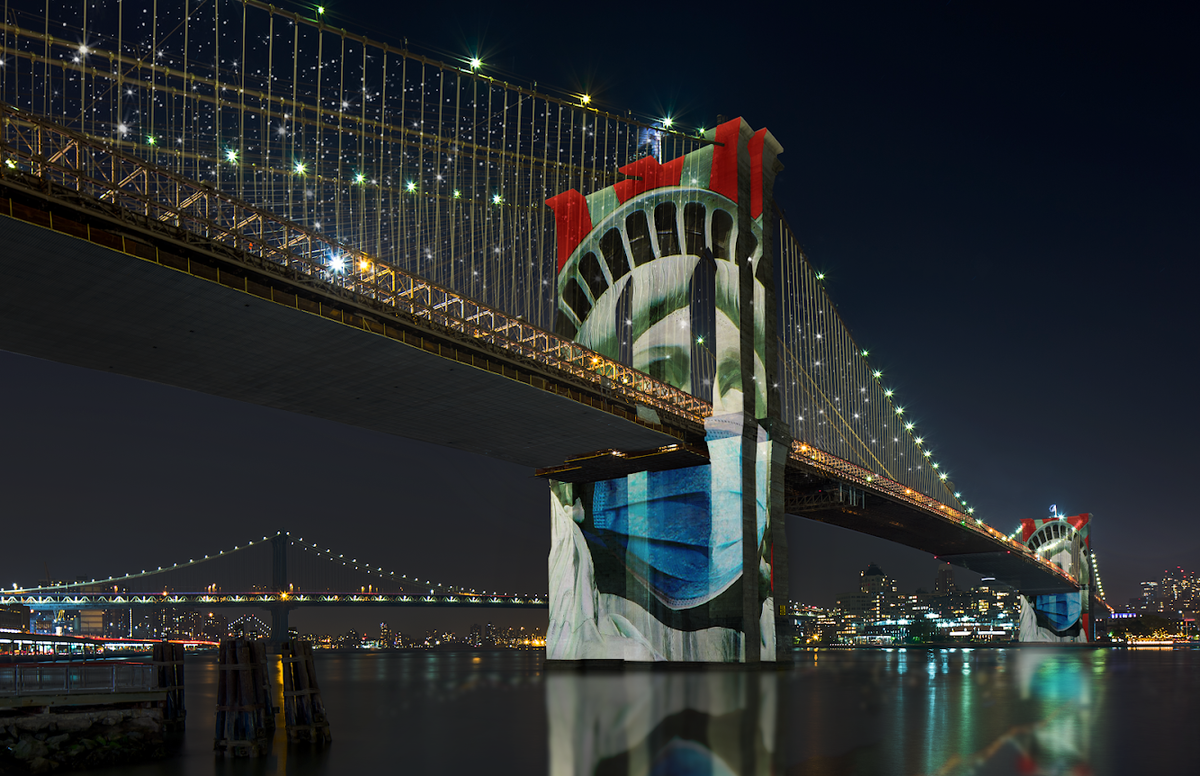 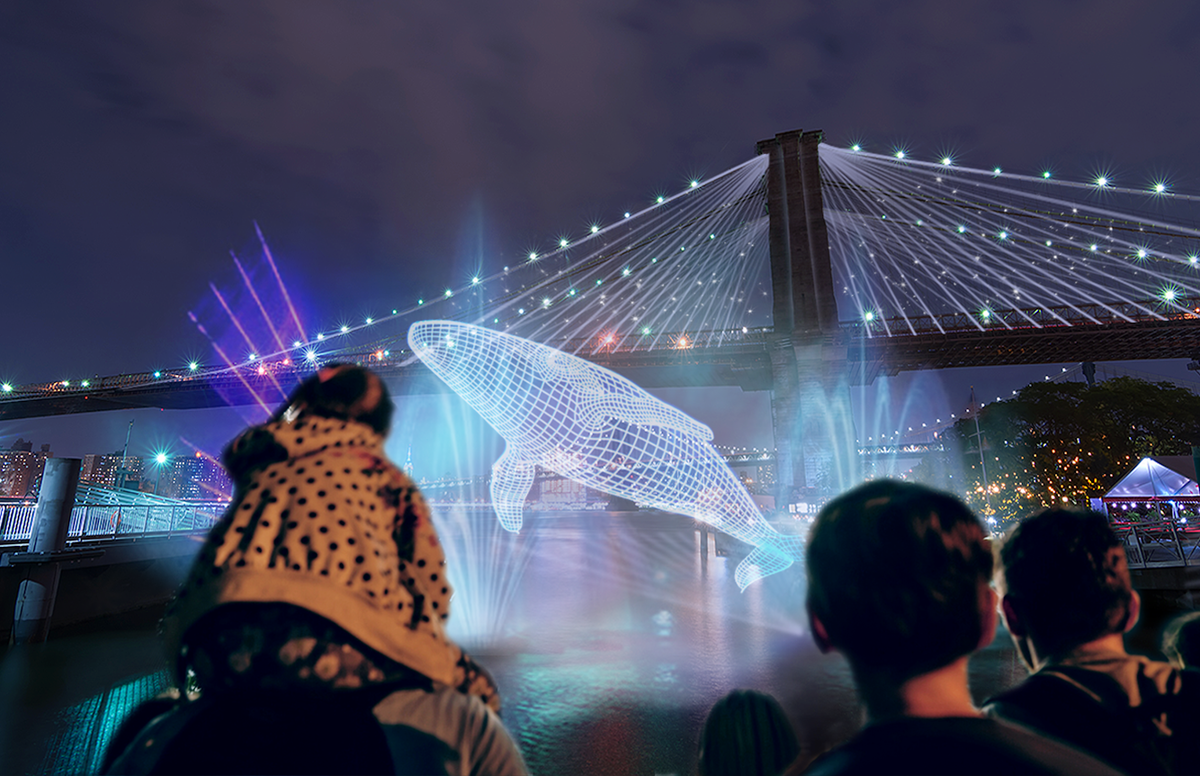 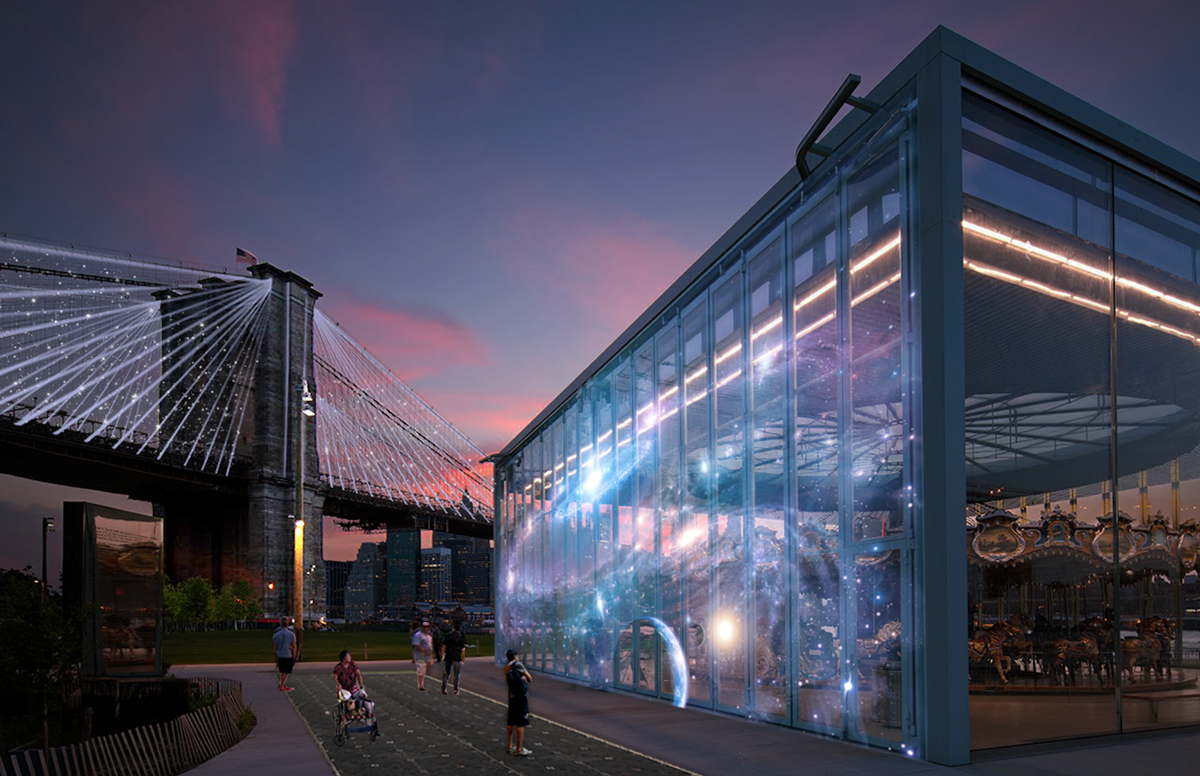 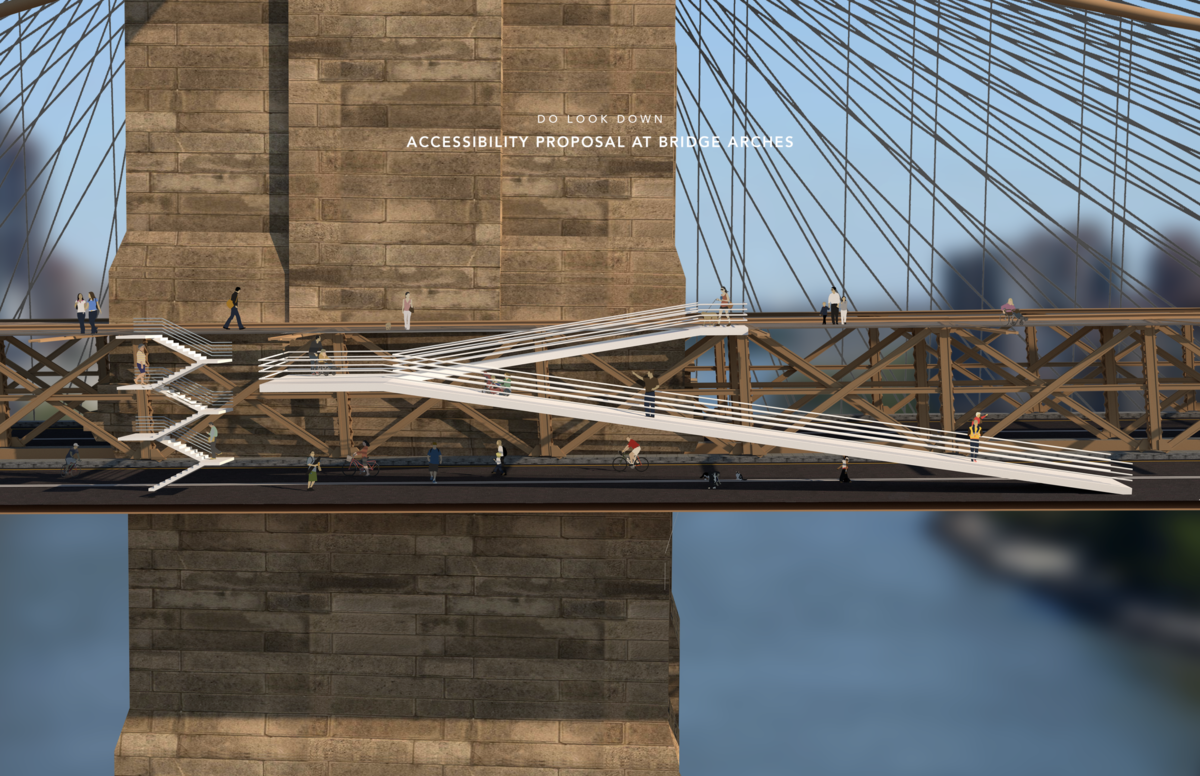 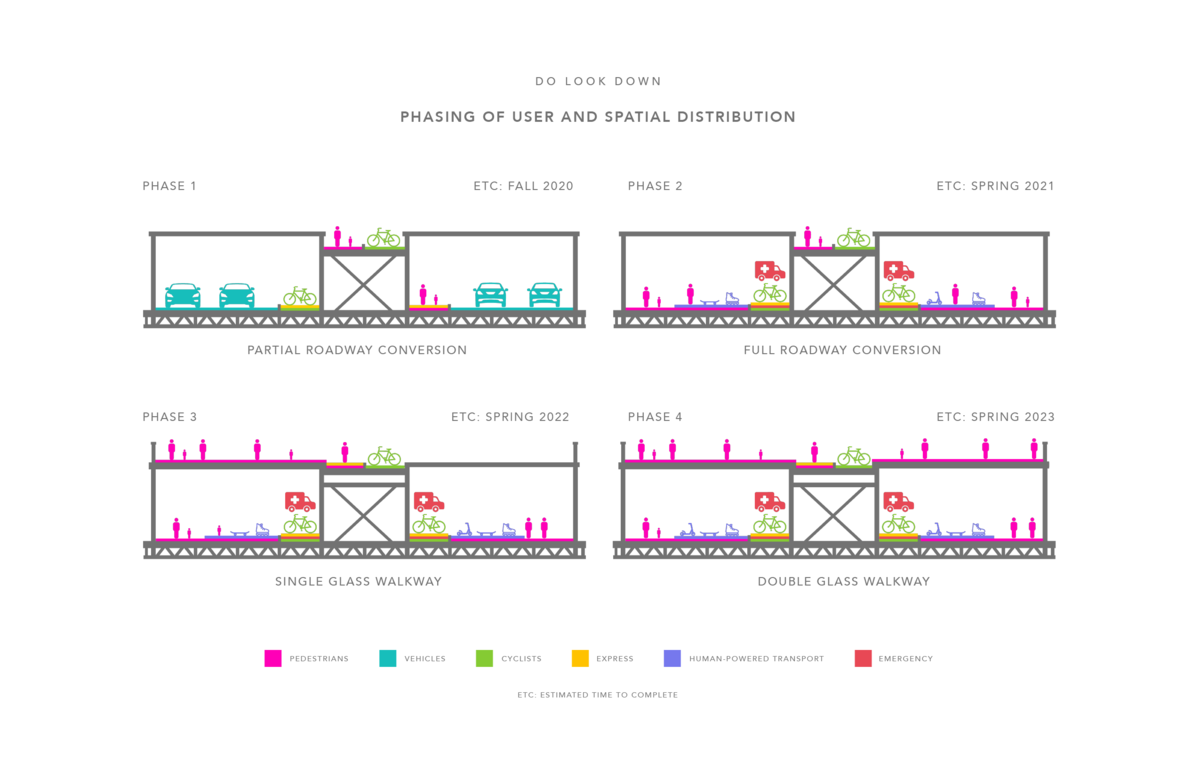 "Do Look Down’s installation of a glass surface above the bridge’s girders creates a whimsical new pedestrian space activated through art installations and seasonal programming."

"The lower roadway is converted into additional walkable and human-powered transport space that also offers opportunities for local vendors and performers. Here is a visualization of a Brooklyn Bridge Flea Market."

"Translucent material allows for new ways to experience the Brooklyn Bridge, as pedestrians can enjoy the roadway by looking down or by looking up. Removable colored film can further engage local artists."

"Powered by kinetic paving, an LED and projection system is mobilized to honor the city’s cultures, histories, and identities."

"Beyond the bridge, art installations can be created across New York City via magical holograms that can be projected onto a fountain mist produced by the water of the East River and set against the backdrop of the Brooklyn Bridge and Lower Manhattan skyline."

"By reimagining the bridge in tandem with its neighbors, we hope to reinforce the intimate relationships shared among them. A transparent OLED display can be installed at the facade of Jane’s Carousel to preserve the visibility of its stunning interior whilst responding to closures due to COVID-19."

"In consideration of mobility and accessibility options for all bodies, we propose a set of stairs and ramps at the bridge's towers. This encourages users to seamlessly experience both the upper and lower walkways."

"This sectional diagram represents our vision for phasing. The roadway closure phases can be implemented virtually immediately, responding to the social distancing needs demanded by the on-going pandemic."